Tomás Milián who died last week from a stroke in his apartment in Miami, was born in Havana, Cuba, on March 3, 1933. His father was an army general under Gerardo Machado, president of Cuba between 1925 and 1933. After the collapse of Machado's government, Tomás' father was arrested and jailed; he was released later, but denied most of his civil rights.  In 1946, a 12-year old Tomás witnessed the suicide of his father, an event that would scar the young man for life. In 1957 the family moved to the US.

Tomás became a student of Lee Strasberg, studying method acting at the Actors Studio in New York City. He was offered a few minor roles in major productions but decided to move to Italy to prove his luck in the then flourishing Italian movie industry. In the late 1950s and early 1960s he appeared as a supporting actor in several movies produced and directed by Mauro Bolognini.

In 1965 Spanish director Eugenio Martin offered him a role in the Italian-Spanish co-production The Bounty Killer (El precio de un Hombre, Italian title: La morte ti segue... ma non ha fretta). His next role, in Sergio Sollima's The Big Gundown (La Resa dei Conti), as the charming Mexican bandit Cuchillo, falsely accused of rape, would mark his great breakthrough: the movie also featured Lee van Cleef and is often called one of the finest spaghetti westerns in history, topped only by some of Sergio Leone's masterpieces. The finale features a famous duel with the charactor of Cuchillo beating a ruthless gunman with his knife, the so-called "poor man's gun". Milian would return as Cuchillo in Run Man Run, in which the character had become a revolutionary. To fans of the spaghetii western, he will forever be Cuchillo.

Ironically this refugee from Cuba was asked to play a left-wing revolutionary in movies like Giuli Petroni's Tepepa (in which he appeared alongside Orson Welles!) and Sergio Corbucci's Vamos a matar, Compañeros. He saw his characters as Third World heroes, making history for those who were denied a decent life, not necessarily as political (that is communist) activists, but on the set of Face to Face he would repeatedly clash with co-protagonist Gian-Maria Volonté, a left-wing activist. He also appeared in the non-political, but highly symbolical (some would say diabotical) Django Kill... If You Live, Shoot! (Se sei vivo spara).

Even when playing Spanish speaking characters, Tomás Milián was usually dubbed by a voice actor (a practice very common in Italy), but in Tepepa he delivered his own lines for the first time, creating a curious - and according to many very funny - mixed language called 'Spitaliano' that contributed a lot to his popularity in Italy.

After the glory years of the spaghetti western, Tomas Milián turned to other genres such as giallo, poliziotesco and comedy. He became enduringly popular in his new home country (he had become an Italian state citizen in 1969) thanks to two roles: the petty thief Er Monezza and the unorthodox police officer Nico Giraldi (in a series of eleven comedy thrillers between 1976 and 1984). Milian was dubbed in these movies but wrote his own lines in Roman slang.

Although he will be remembered primarily for his appearances in genre movies, Tomás Milián also appeared in highly regarded - non-genre  - productions such as Bernardo Bertolucci's La Luna (1979) and Michelangelo Antonioni's Identificazione di una Donna (1980). In the autumn of his years, he returned to the US and made some guest appearances in Hollywood productions such as Steven Spielberg's Amistad (1997) and Steven Soderbergh's Traffic (2000).

Ironically he had expressed his wish to return to Rome to his close friend Monica Cattaneo shortly before his death on March 22.

A List of all Spaghetti Westerns starring Tomas Milian: 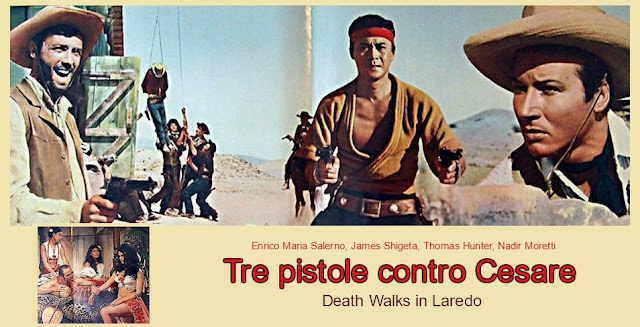 In the opening scene a cowboy named Selby is accused of cheating and challenged to a duel by the four men he had beaten in a game of poker. It's a scene that looks like dozens of other scenes from spaghetti westerns, until Selby pulls out a four-barreled gun and shoots all four opponents with one single shot. We're not only supposed to believe that this fantasy gun works, but also that it can shoot in four different directions at the same time. This is western wonderland ... The movie was a personal idea of producer Dino de Laurentiis, who was fascinated by the success of Leone's A Fistful of Dollars and wanted to copy (or even double) it by producing a western that was at least twice as extravagant. As far as I know it's the only spaghetti western that was shot in Algeria and I guess it's also the only one to feature a villain called Julius Cesar Fuller, a lunatic who lives in a imperial palace, located on a hilltop and has surrounded himself by a harem o

Kill the Poker Player - Sherlock out West  A spaghetti-paella western that plays more like a mystery thriller. Several Italian westerns had Giallo influences, but this one presents it thriller elements in the style of the British whodunnit à la Agatha Christie or Sir Arthur Conan Doyle. Robert Woods actually plays a character of British descent, an insurance investigator called Jonathan Pinkerton, working for Lloyds of London, investigating a bank robbery that ended in bloodshed. Two bandits made several victims during the robbery, but they were eliminated themselves by a third person, the man on the background who masterminded the crime and ran off with the money. At one point it is suggested that Woods' character is not a detective but a federal agent. An undercover agent going undercover as a British detective? The plot is a bit haphazard, but offers enoughs red herrings to keep you guessing who will eventually be revealed as the culprit. The killings are performe